Train your own new vaccine in body samples, either by shooting down the virus agents hidden in infected cells, or by isolating those cells, only clearing the healthy cells around them. You win when there are only healthy cells OR only infected cells remaining. Your vaccine's progress depends on how many remaining cells of either type you managed to preserve.

This game was made by PUNKCAKE Délicieux, a game developping duo making and releasing a new game every month through Patreon and itch.io!

PUNKCAKE Délicieux is made up of lovely humans Benjamin Soulé and Rémy Devaux.

Pentadrangle made the music for Metavaxx! He's also the musician behind the games Cyber shadow, Roof Rage, Spicy Piggy, VoidRun, Lords of Exile and more!

For now, the same seems to be true of other games using the SUGAR engine (I tested Damocle's Gaze).

Anyway this game is great! :)

Hi there! I wanted to try and stream this game to my friends on Discord but the game won't let me stream it to Discord. Is this a known issue, or a new bug?

Hi! We're not aware of this! Can you tell us more? Do you just get a black screen on Discord? Can you try enabling/disabling the shader in the game's settings and see if that makes a difference? Thanks. :)

Ok so that sounds like Discord isn't picking up the game's video if it goes through your graphics card (with the shader) unless you're in fullscreen. I have 0 idea why it wouldn't pick up the audio in fullscreen though, that's very odd. I can't really promise a fix for now but this is a useful bug report, thanks!

this is an awesome game. thank you :)

I absolutely love Minesweeper, but it's had its limitations as a game. Having some true zero-sum games where you have literally no choice but to guess. Here, that inevitability becomes part of the play experience instead - blending methodical logic puzzling with the occasional burst of intense shmup action! I love it.

I would like to see more going forward though. Expand on both mechanics.

>For one, a tool to "mark" suspected infected cells would be MASSIVELY appreciated. Especially in this self-looping spacially dynamic layout, it can get confusing sometimes which cells you've deemed unsafe.

>Shield cells are a bit obnoxious, really slow the pace of a fight to a crawl. It'd be nice if they worked in a way that discouraged aggression instead of outright rejecting it. Like if they returned projectiles for every projectile you shot at them, or charged a powerful projectile of their own with each successive shot, or had an explosive nova attack on death.

>Having more than just one factor in a vaxxine when selecting a company would make for more compelling replays. Like for example one giving you a shotgun spray of weak shots - encouraging more close-quarters (high risk, high reward) play in combat, while also asking you to be real close to a cell when you destroy it - making mistakes much riskier. Or another company giving their vaxxine the ability to scan a few cells each level to determine if they're infected or not - but having a weaker weapon, encouraging much more focus on not opening infected cells. Some alt-fires specific to the company like rocket-adjacents that can shred clusters of microbes, but can also open cells easily if not aimed away from them, or a slowing miasma that gives you room to breathe in a tense fight. Things that play into both the search and the destroy elements of the game.

>Some secondary features for some microbes. Microbes like the red and gray are a bit bland in a fight. Perhaps pure molecules could have additional functions for being unblended like their hybrids.

Overall, I just wanna see more of this. I really like what I'm seeing, and I hope to see more of it in the future,

So update I found the company that lets you mark cells. So it is a feature, but I don't think it should be exclusively locked behind one company. It's too much of a nice QoL to only have in 1 of 6 playstlyes.

Also the method you use is a bit awkward - just bumping into cells to mark them. It would be nice to be able to hover over a cell and press/hold a button for marking. One last small thing is that the current marking mask can somewhat blur the lines between cells. It'd be nice if there was a marking method that kept the borders more distinct? But that isn't nearly as much of an issue. All you have to do if you're unsure is unmark one of your cells real quick.

Lastly, upon a complete playthrough, the virus molecules could definitely use some more spice. The Gray, White, Red, and Pink variants in particular are very simple to defeat unless they're hybridized with another type. Perhaps having a cluster of three or more of the same color will grant a molecule new abilities within its own variant.

Also the type rarity is a bit strange too. Calcium and Phosphorus are Rare despite being pretty harmless while Helium is Uncommon and Nitrogen and Oxygen are Common. Of course I imagine that may be moreso for variety than challenge, in which case fair enough.

I 100% agree with the marking thing. It's really hard for me to keep stuff like that in my head.

Beautiful game! I've been having discussions about minesweeper with my friend the last few days so as soon as I saw this we had to play it. The theming and visuals are really gorgeous, and I love the variation of minesweeper!

I have to agree that it would be much more enjoyable if I could mark infected cells as I went from the get go, maybe it could be an option to toggle?

Thank you for the wonderful game!

Edit: Saw a typo - "choose you laboratory" you > your

PUNKCAKE keep reinventing the shooter genre. This time they've crossed it with Minesweeper, and it's awesome. Loads of different baddies and upgrades, and there's a bit of a management sim going on in the background - it's not as simple as beating each level.. you have to pick your upgrades carefully and beat the system. The ability to unlock new factions makes this incredibly replayable.

hey! :) looks like a dope game and would love to play, but am on Mac. any plans to port it to Mac

Hi, we do plan to port all our games to Mac, and we're hoping to get it done before the end of the year, but we can't be any more precise than that for now.

Cool, looking forward to it :)

so uh... the game crashed on me once, and now it refuses to launch...

hey, sorry about this. could you send us the log.txt and save.bnk files in the game folder to trasevol.dog@gmail.com?

if you don't mind losing your highscores and your current save, I have a feeling removing the save.bnk file from the folder will help the game function again.

I purchased this, but it is unplayable (displays with green lines) on my Thinkpad X1Y3. It seems to only support OpenGL. Will you please support software rendering? Perhaps with an alternative executable?

Wait, I finally figured out that the left mouse button is what selects menu options. Why? That seems like a poor design choice, especially since you do not provide a list of the default key bindings.

With that, I was able to fumble through the menu and select "FX SCREEN: OFF" and now the green lines are gone. I'd like to see the FX screen better supported, and also consider not having that be the default.

Also, no rebinding keys? I really want to like this game, but I don't have a keyboard with WASD keys positioned like on QWERTY.

now this is what i call creative

Want to see Metavaxx in action? I played it on my channel... It's SO much fun!

Yes but not before a few months.

Awesome, hit me up here when it happens: https://www.gamingonlinux.com/

The game isn't working...
I tried the "compatibility mode" and Turned Off My antivirus but still.. Not working..
looks like I just wasted my money 🤷‍♂️

Hi, can you see a log.txt file in the game's files? If so, could you please send me its content at trasevol.dog@gmail.com? I may be able to help. If you don't see it than there's good chance it is indeed your anti-virus blocking it. It's possible that turning it off wouldn't be enough and that you'd have to add an exception for the game's executable instead.

I have send it

Would it be possible to have the flagging upgrade require a keypress being held down to function? I/E having to hold Shift and then bump into a cell to flag it.

The fact that just touching a cell flags it, but you also bounce back when doing so makes tight corridors a pain to deal with with this upgrade.

I'm not sure if I'm doing something wrong, but I can't seem to get the game to even launch? I've tried re-downloading it, running it in compatibility mode, as administrator, and even tried to launch it through steam (via non-steam game feature), all it nets me is my computer thinking for a moment, then nothing, no windows pop up, no noticable changes in the resource monitor, just a few second of my cursor changing, then back to business as usual.

I'd really love to play this game, I saw Wanderbot playing on Youtbe, and instantly fell in love with the art, music, and gameplay. Any help on fixing the issue would be greatly appreciated!


Edit:
Nvm, turns out my anti-virus didn't like the idea of an anti-viral game running x3 (was able to get it running by adding it as an exception to Avast, if anyone else is running into this issue)

This game is pretty fun, but I have a few points of feedback.
1: In the menus, why is Left Click the "enter" button instead of the "select this" button? I keep clicking on a thing to select it and end up entering the tile I had highlighted before.
2: It seems at least on my machine that the mouse controls are a little off-center. The aim direction assumes the player is a little down and to the right than where they actually are.
3: It might be ideal to let people mark cells as infected right from the start instead of it being an unlock. A bit of a quality of life improvement than anything else.

Other than that, this is a decently well-made project. Well done.

would it be possible to add an option that disables the crt post processing effect? i'm not sure if that's the cause, but i'm on windows vista and its running a bit slowly for me,,, sorry to disturb >_< 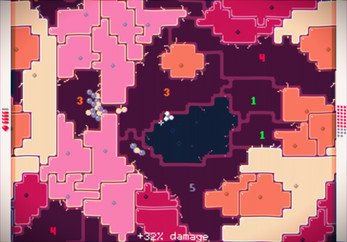 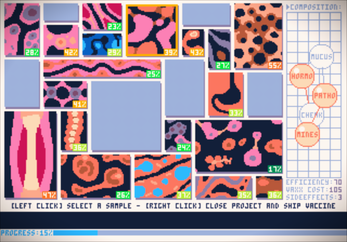 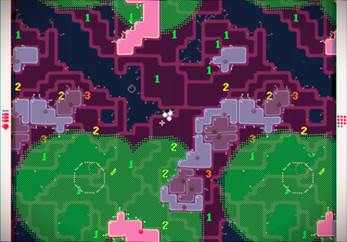 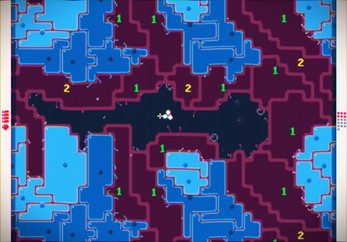 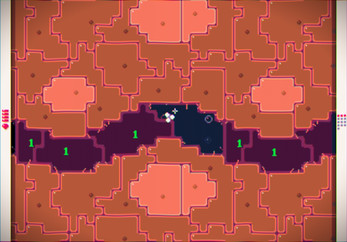