A relaxing creative game where you care for your shroomies and make them a cozy little home in a big mushroom and take nice pictures!

Shroomies are small demi-spirits of the forest who are known for settling into mushrooms! In shroomchitect, a small group of shroomies has just found a brand new mushroom and they trust you to help them turn it into a welcoming home at least as cute as they are!

🤗 A stress-free, cute, warm and wholesome game
🔨 Help your shroomies build a comfy base
💖 Care for them like virtual pets
📸 Take pictures with the built-in photo mode
⏱ Play sessions average upwards of 30 minutes
🎨 Homebrew voxel graphics and pixel-art
🎶 Original lo-fi soundtrack by Pentadrangle

The game can be played with only a mouse! The only think that requires a keyboard is renaming your shroomies, but that's completely optional.

The game features an in-game tutorial which explains all the controls.

Shroomchitect is an atmospheric creative game. It's inspired of games like Townscaper, The Sims and Dwarf Fortress, but offers an experience of a much smaller and accessible scope. It's a warm, relaxing experience, and it even features a photo-mode!

There isn't a boss to beat or a goal to achieve, or even a gameover to avoid, just make a nice little home, keep your shroomies happy, take some neat pictures, and have a good time!

If you'd like you can come to our Discord to talk about the game and share pictures and generated gifs!

I really wish there was a Mac version! I have to go pull out my old windows computer any time I wanna mess with it lol.

This game looks AWESOME, i just wish i could get it on steam!

honestly, you could easily get away with selling this for a bit more than 6 on steam. but porting this to steam is up to you.

Great game! I love that you can generate GIFs! I never see games do this, but it is such a cool feature! Was very excited to show my creations to all my friends ~

Perhaps I'm completely oblivious, but in the trailer, the shroomies are shown higher up inside of the mushroom. But I can't seem to get them there. Is there a ladder or staircase I can build?

You can tell your shroomies to walk on top of  any solid block that has free space above it, just right-click on the upper side of the block with your shroomie selected. Shroomies can climb walls but not ceilings and they will only go to a space they can reach, so you might want to dig out some blocks if you want to reach the top of your mushroom's cap for example. However your shroomies should be able to move to some unobstructed blocks of the mushroom's stalk from the very beginning.

I was super excited to play this because I had seen quite a few wholesome gifs on Twitter! The aesthetics of the game are super cute, the tunes are very relaxing and the gameplay is just chill. Once you get the hang of the mechanics you can start building your own little mushroom fantasy! Yes, I played around with it for almost an hour and a half ... can't wait to rename more shroomies after my community peops and discover all the different mushrooms! 👀

I would love it if there were a few more building and gardening options, as well as cute little interactions between the shroomies. Maybe even an option for them to multiply on their own!
Reply
shamrock_milkshake325 days ago

This Game Is Pretty Cool! And Runs Smoothly Great Job On That 5/5

First off, this game runs perfectly through Wine on my Linux machine, so you should be able to get it working as well if that happens to be your OS of choice.

This game is absolutely adorable. I enjoy peaceful games quite a bit and this one is really sweet. Of course, if casual carefree games don't really interest you this game will have very little to do. I recommend this game to anyone looking for a cutesy little game to spend some time on and relax. I am having a good deal of fun.

One reasonable feature I'd like to see if another patch is planned is some way to screenshot  without having the placement grid visible. As far as I can tell right now, photo mode only will show the whole build and being on a specific layer always shows a grid where things can be placed. It would be nice if photo mode maintained your current layer view and hid the grid so you could get pretty screenshots of indoor areas, for example.

A less reasonable feature that part of me wishes was available was some way for the shroomies to harvest or otherwise obtain mushrooms to use them to build. I duplicated a save file where I built a nice wooden house and modified it to turn the house into mushroom blocks (replacing the wood) and the result makes me wish there was some way to replicate it in a gameplay fashion. Only having wooden buildings available is a tad limiting and being able to use mushrooms in this way would help spice up a lot of builds. That said, I can understand this feature not existing because it would require some relatively large addition (like a new mechanic or resource to obtain).

Thank you so much for the thoughtful feedback! We can't promise another patch but these do seem like good changes to include if we ever make one. Really glad to hear you're enjoying the game, and also well done on modifying your save to get a mushroom house, I actually love that 😄

I'm having a great time with Shroomchitect. It's just exactly the peaceful, lovely experience I long for. I do have one problem however: I'm not able to save gifs. I can click "save to desktop" but no file is created...

Thank you for the kind words and thank you again for letting us know about the issue! Are you able to save photos or is that not working either? Here are two things you can try:

Would love to know if either solution works! I'm also interested in whether you're having the same issue with photos!

Thank you very much for your reply! Yes, photos didn't work either. But now I changed the folder path and this way it works. =) It's a wonderful idea to be able to make gifs of my creations.

Thank you again and have a lovely weekend!

Not your regular PUNKCAKE game! If you're looking for a "feels like," I got some Tamagotchi vibes from it.  Keeping your little shroomies happy, fed, and busy, is the closest thing to a challenge in Shroomchitect.  It's super chill.  As they say, there are no bosses or goals, so you're left to kick around building cute little social spaces for them like little cottage tables suspended in the rooftops of your mushroom, surrounded by sparkling lanterns and overlooking your gardens.

Fantastic aesthetic! Is the pixelart shader being applied to the Sprites that are already pixelart as well, or does it dodge them and just apply to the environment?

Thank you! There's no pixelart shader! It's difficult to explain exactly how it works because it's quite convoluted  but the voxel structure is rendered block by block, with no shaders involved. The sprite rendering is mixed into the whole thing to get the right layering. :)

Wow, that's really intriguing. Would love to see if you ever make a tutorial on this effect! Thanks for your response, hope you're having a lovely weekend!

This is fantastic; soundtrack and ambience is superb :D

I treasure this little game. It's unlike anything that I've played before, and I simply adore how cute and relaxing it is. I've put an hour into it, and I plan on playing it a lot more.

This game is so serene, I love the sound effects in the woods! Being able to automatically make an animated gift of the mushroom is a very nice touch! (Too bad the gif is too big for itch)

Here is what I made after about 30 minutes: 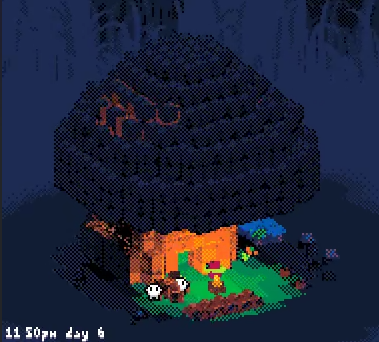 wait so is this a pixel game?

A bit disappointing and my least favorite Punkcake game so far unfortunately. It's cute but just feels like there is nothing to do.

We appreciate the feedback! This one is definitely very different from our previous releases since it's our first creative game. We put a lot of work into making a pleasant experience rather than a challenging one.
We will be getting back to our more classic formula with our next release though, so you can look forward to that. :) 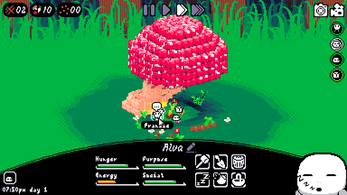 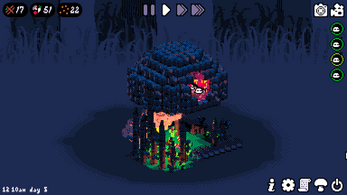 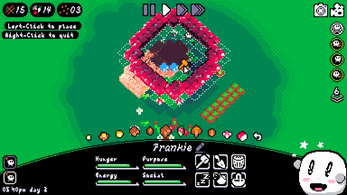 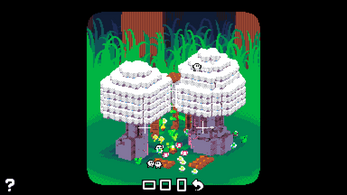 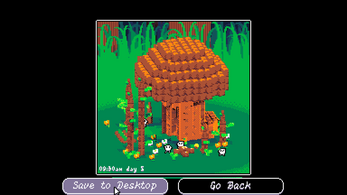 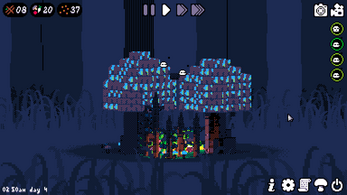