Remake history and race your opponents for a complete and glorious timeline in this lightning-fast card game.

Rush for the Ages is a quick card game about outplaying your two opponents while rushing through the ages to unlock new possibilities. Find the best synergies between the different cards and compete for the prestige tokens uncovered as the game advances. But as soon as any player sets down a 7th card in their timeline, the game ends and a winner is sanctified.

This game requires a mouse to play and nothing else!

Most elements of the game have descriptive text popping up when you place your cursor over them. Game instructions are always written at the bottom of the screen, check there if you are unsure of what you're doing.

(If you are streaming or recording the game, make sure your cursor is visible in the recording!)

The goal of the game is to have more glory (symbolized by stars) than your two opponents. You also have population which counts towards your total score.

First, random cards are given to the players. Then players take turns to play. The order is random, so you may be first, second or third. When it's your turn, you may do one of the following actions:

You can only do one of these things per turn. Once it's done you have to wait for your opponents to play their turn as well, until it's yours again.

All cards have tags defining their types: Military, Health, Art, etc. These tags are represented as little colorful symbols at the bottom of the cards.

Most cards belong to an Age, with the exception of environment cards. The age is represented by the card's name's color: Antiquity cards' are yellow, Middle Ages cards' are orange, and Modern History cards' are green. Additionally, this is also represented by an icon in the upper-right corner of the card, respectively a broken column, a castle, or a gear.

Most cards have a description, which tells you how they affect the game when they are played.

Some cards have population, which is added to the player's population if they have enough free population space for them.

Some cards have "links", marked as pink chainlinks followed by the name of the linked cards. If two linked cards are played, each receives a bonus of two points.

Each card is unique and can only appear once per game.

At the 1st, 4th and 7th cards placed in the Ages Pool, three prestige tokens are uncovered. Taking cards back from the Ages Pool does not affect uncovered tokens. Once uncovered, placing your cursor over a token will tell you what card tags are required to compete for it: the player who has the most of these specific tags in their cards gets 5 points, and the player who has the second-most gets 2 points.

In case of a tie between players, the players furthest in the play order are favored.

Note that it is usually a good idea to compete for these tokens.

End of the game:

Once a 7th card is set in any player's timeline, or a 9th card is discarded to the Ages Pool, the game ends and the player with the highest score wins.

May your civilization meet a glorious fate.

If you'd like you can come to our Discord to talk about the game and share strategies!

Rush_for_the_Ages_windows.zip 22 MB
Try this if other version doesn't work 22 MB

You could release this as a paper card game with just a few minor tweaks, and I would buy it to play with my friends! If I had any.

thank you for the separate sale!! I don’t play shooters much so getting mushroom + rush together is great :D

for the record, this runs just great on linux by adding the game to steam and settings options to use latest proton.

any chance this will be released on Steam or other platforms? it would be hella useful to have a cloud to save your progress and some achievements for a little competitiveness among the players

What if I need to quit in the middle of a game. How do I do that?

Rush for the Ages has nailed the "a fast game's a good game" ideology. As with any PUNKCAKE game, it's easy to learn, difficult to master, and even harder to put down. It's all about card synergy but you're playing with a shared pool of cards, slow-revealing objectives, and multiple layers of interaction. Addictive!

What controls the population cap a player has? EDIT: Oh, I see it now, it's on tooltips: buildings add 2, territories add 5. Leaving this here for anyone else with the same question.

Fun game! Y'all did a great job!

Any plans for a local hotseat style play? Not entirely sure how one would hide your hands, but it'd be fun to play against some humans.

Hi there, I really like this game!
Is there a chance for a Steam release?

Thank you! There is a chance, but it won't happen before at the very least a few months. 🙂

Is this coming to Steam? I’d like to try it with Proton.

Lookup wine-tkg or wine-ge-custom on github, there are scripts (and for some distros, prebuilt packages) that apply the proton patches to wine, that you can install systemwide to run anything.

I think you can also make Steam run non-steam games added to the library with Proton, but I haven’t tried that.

I play this game with Proton, it works well :) You can add non-Steam game into Steam. Come to our Discord if you need some help! 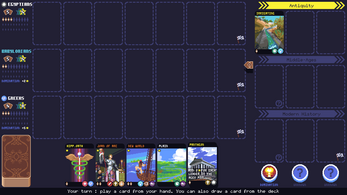 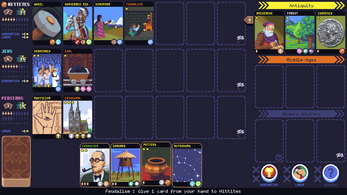 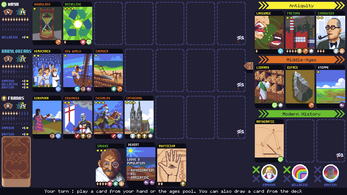 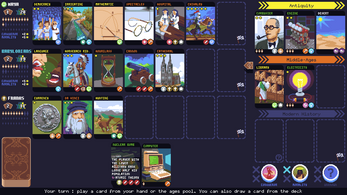 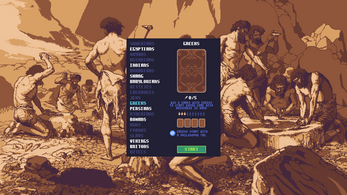